With a new look and enhanced functionality, I am pleased to announce Version 10 of my CW trainer is here: 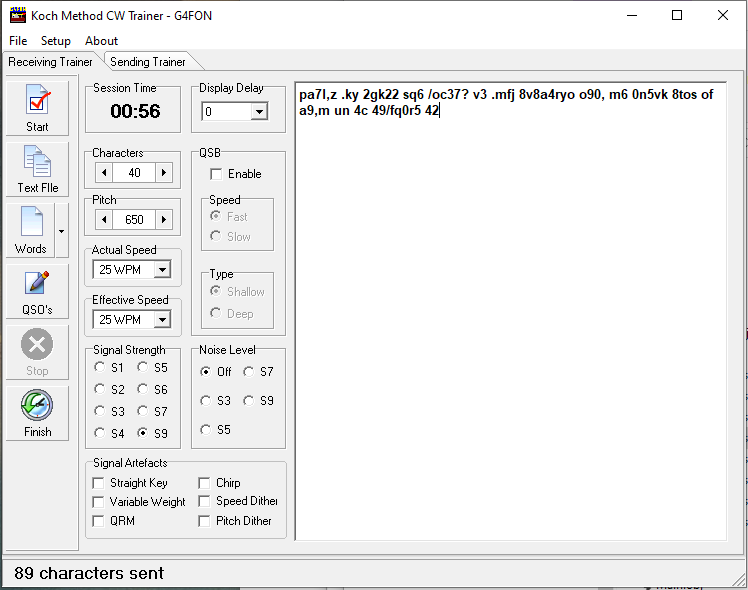 Since it first became available back in 2002, my Morse trainer has been downloaded countless times. I used to request a QSL card as a download acknowledgement and the software has achieved DXCC Honor Roll in its right over the years.

As well as the QSL cards, I have had lots and lots of intesting conversations with different people about their learning methods and successes and failures. This has given me a lot of insight into how we learn Morse and it has become clear that Morse is a language just like French or German. This means that the language learning skills are just as applicable to Morse as they are to French or German, for example.

In 2018 I was invited to give a lecture at the RSGB Convention about techniques for learing Morse which was recorded by the RSGB and they have given me permission to reproduce it here. As well as giving useful tips on learning Morse, the video talks about the operation of the new version and which is, I am told, well worth watching.

Version 9 was able to convert text to Morse, but this version makes it even simpler. Note, that like many other options, this one only becomes available once you have learned all of the built in characters and any that you have defined yourself.

To get started, visit The Gutenberg Press , chose a book from their large selection and download it in 'Plain Text UTF-8' format.

Next open the downloaded text file in Notepad and remove any text which does not form part of the story, for example the index, and which you would not wish to listen to. Make sure that you save the file as ANSI and not UTF-8 for the software to work correctly.

Now click on 'Record Text File' in the 'Files' menu of the Morse Trainer and a window should open as in the image below: 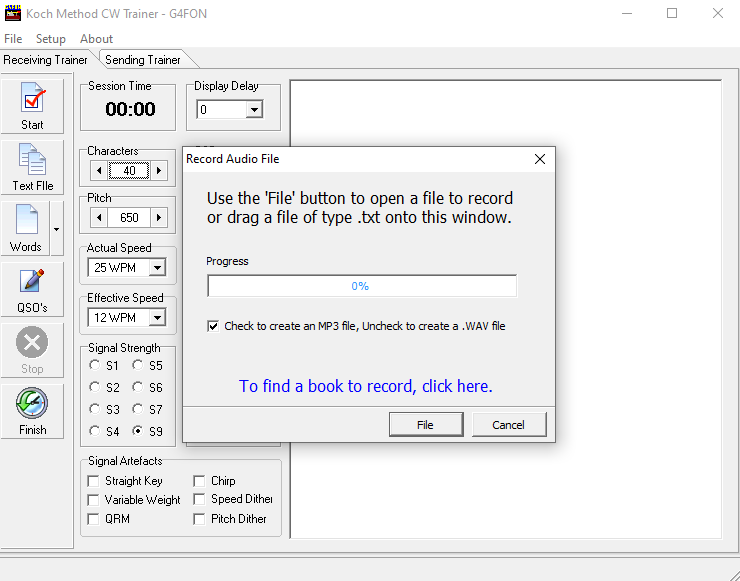 Finally either drag the text file of the book onto the popup window or use the File button and browse to it.

You should see the window turn red and the progress bar move steadily across the window as the Audio Book is created. You have the option to create an MP3 file for an MP3 file player or a WAV file if you want to burn the result onto a CD.

You should now have a Morse Audio version of your chosen book to listen to. It will be in the same folder as the original text file.

I have found and also had it confirmed to me that you should listen to the book for several hours as you go about your daily routine. You do not have to concentrate all the time on the Morse as your subconscious brain is working hard to learn what it hears.

Oh, and by the way, if you simply want to listen to a text file in Morse Code, drag it onto the main window and it will be sent for you with each word appearing in the output window after it is sent. Again, this only works after you have learned all of the built in characters and any that you may have defined.

One of the new features of Version 10 is the Sending Trainer which becomes available once you have learned the 40 built in Morse characters and any new ones you may have defined. 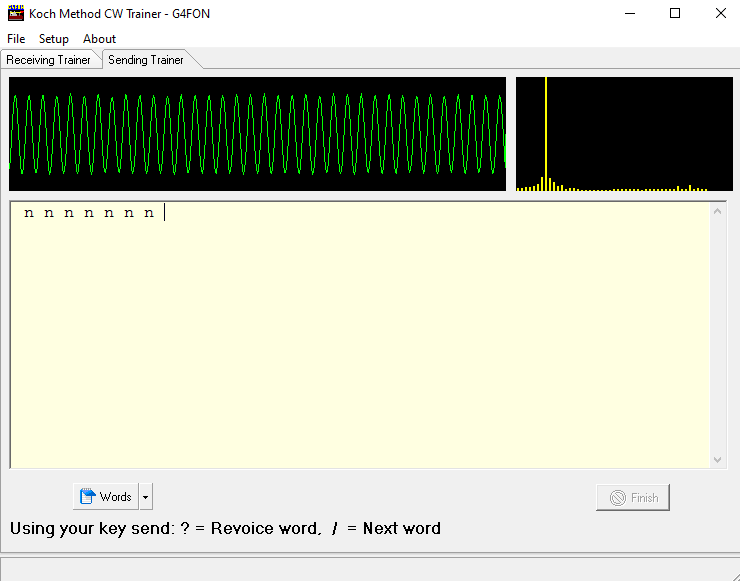 My philosophy in designing this addition to the software is firstly that words should be presented to you as closely as they would come into your head during a QSO and secondly that you should be using your radio's keyer for practicing as this replicates exactly how you would send Morse during a QSO.

To achieve the first goal, the software will speak words to you. That way you have to work out the spelling in your head - exactly as you would do on the air.

To achieve the second goal you will need to connect the sidetone from you radio to your PC's sound card input. Adjust the input level until you see approximately the same display as the screenshot above. There are two windows of interest, the oscilloscope display of the incoming signal and the FFT display showing the pitch of the sidetone.

Once you are all connected up, choose a practice speed, the number of attempts you want to make to send the word back and finally the words you want to practice and away you go.

The software will speak a word which you must then send back correctly to move on to the next word. As you finish each letter it will be echoed in the main window. If you make an error then the word will be spoken again and if your Morse does not match any of the characters you have learned then the dots and dashes will be displayed to help you.

Microsoft supplies a number of different voices with Window and you have an uption to select the voice that suits you best.

At any time you can ask for the word to be spoken again by sending a ? and to move on to the next random word, send a /.

You can also use the software to read the Morse that you send which will appear in the window. Note that the software is not designed to read Morse off-air!

I had originally planned to play the Morse sidetone from your keyer to the sound card output, but I soon discovered a Windows limitation that I have not been able to resolve - the latency between the sound input card input and the sound card output. It amounts to about a dot period at 25 WPM which makes it impossible to play back Morse sidetone into the headphones along with the spoke words and still make it usable.

This means that you will have to come up with a way to hear both the Morse and the spken words!

I shall be continuing in my research into this problem and if I do resolve it then I will obviously make the results available here.

It has come to my attention that there is a problem with running the software when it is installed as a 'standard' user.

I am currently looking into the problem and will update the web site if and when I have a solution.

Keep checking back for updates!