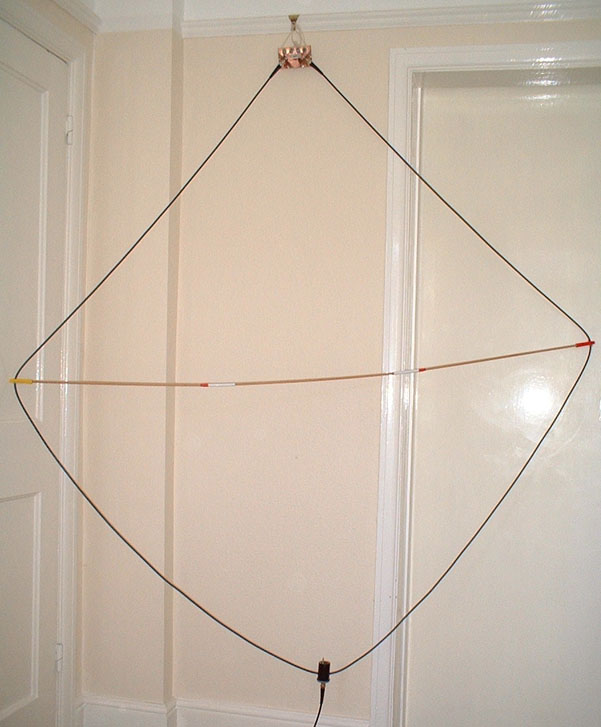 The entire antenna assembled and hung up. Note the tuning head at the top
matching unit at the bottom, with the spreader supported by the old felt tip pen lids

Described here is a simple multi-band magnetic loop antenna designed for 20, 30 and 40 metres. For its size, the performance of the antenna always astounds me, although it is never going to replace a Yagi!

The antenna is made from 16 feet of RG58 coax cable terminated in a BNC connector at each end, which attach to mating BNC sockets on the control head.

The control head mounts three or four tuning capacitors and a band change switch. This switch selects a capacitor for each band (with the capacitors I chose, I needed two for 40m). Each capacitor resonates the loop on one band. A piece of string is attached to the top of the mounting plate to support the antenna during operation.

The feedpoint for the antenna is at the bottom of the loop, and consists of a matching transformer housed in a 35mm film canister. This matching transformer is wound on an FT50-61 toroid. The RG58 passes through the toroid to form the secondary of the matching transformer. During my experiments, I found that the turns ratio for the primary changed from band to band, with 2 turns on 20m, 3 turns on 30m and 5 turns on 40m. I used a three position slide switch, which I picked up at a rally, and wound a five turn primary onto the toroid using hookup wire. This winding was tapped at two and three turns with each tap connected to the band change switch.

I then drilled a hole in the lid of the film cannister to accommodate a BNC connector.

The connection from the rig to the antenna is another length of coax, again with a BNC connector at each end. 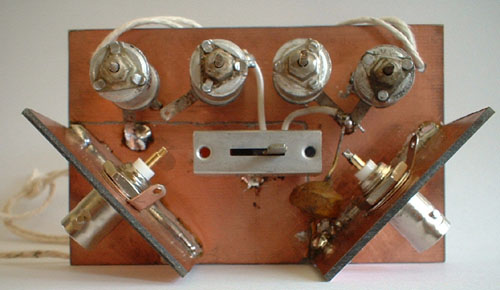 The Control Head with the trimmer capacitors for each band (two for 40m)
Note the band selector switch in the centre, the BNC connectors for the
Coax in the bottom corners and the string at the top for hanging the antenna.

The Control head was built from single sided PCB material, I tried double sided, but the capacitor formed between the two sides prevented the antenna tuning up properly on 20 metres. The mountings for the two BNC connectors are made from double sided PCB material and soldered to the main board on both sides for strength. After mounting the BNC connectors, it is necessary to cut the break the copper on the main PCB to prevent the short between the two sockets that would otherwise occur. If you look closely at the picture above, you will see the cut which starts on the left hand side just above the BNC mounting PCB and the row of capacitors. This cut extends across the base plate where it joins a vertical cut just to the left of the righthand BNC mounting plate.

Finally, you will notice looking at the picture above, that the centre of the coax is unconnected. This is correct, the antenna works by resonating the outer shield of the coax. 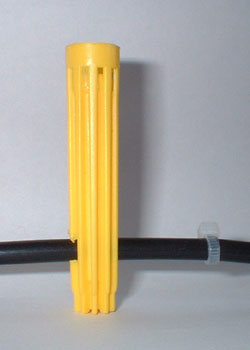 After the first connector, you will need a recepticle for the horizontal spreader. I used the tops of old felt tip pen, through which I drilled a suitable hole to take the coax. I then placed a nylon cable tie about 4 feet from the end of the coax to prevent the spreader from slipping down the coax.

The matching transformer mounted in a 35mm film cannister
Note the band switch on the left and the BNC on the right. 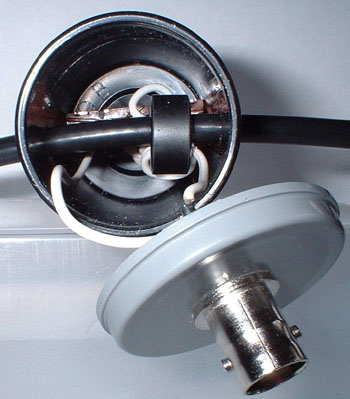 Inside the 35mm film cannister showing the toroid around the RG58 cable
Note the use of hookup wire for the primary of the transformer.

I found it easiest to fabricate the primary side of the matching transformer, mount it into the film cannister and finally pass the coax through the holes in the cannister and through the centre of the toroid.

After mounting the matching transformer, there only remains to add a second recepticle for the spreader, its nylon cable tie and the second BNC Connector.

Aligning the antenna is straightforward, first set the switch in the matching transformer to the position where two turns are active and set the switch on the control head to select the capacitor you want to use for 20 metres. Connnect the antenna to a receiver tuned to 20 metres and tune the selected capacitor for maximum received noise. Move the matching switch to the three turn position and move the control head switch to the second position. Retune the receiver to 30 metres and tune the second capacitor to get the maximum receiver noise. Repeat this for 40 metres.

Once the antenna is roughly tuned, apply some RF through an SWR bridge and fine tune the capacitors for the lowest SWR on the QRP frequency each band. It should be possible to achieve a 1:1 match on all bands. Make sure you switch to receive while adjusting the trimmers as there are high voltages across the capacitors when on transmit.

If you have access to an antenna analyser, such as the MFJ range, then the job of final alignment is simplified.

Initially, I used some dowling as the spreader for the antenna. I cut it into three 21 inch lengths as this fitted nicely into my suitcase for travelling. More recently, I found some polystyrene tubing in a shop selling plastic and balsa wood models. I cut the tubing into 7 inch lengths and used some slightly larger bore tubing for the joins. This spreader can be seen one of the photographs above.

In my travels I have used the antenna many times and I have found that it works best when there is no metal around to act as a Faraday shield. Reinforced concrete buildings are particularly bad for this effect and should be avoided if possible.

If you have any questions, suggestions or good experiences with the antenna, drop me an email, I will be happy to reply.