When I returned to Amateur Radio my CW was decidedly rusty. What I felt I needed was a CW Trainer to get my speed back. I looked around the Web and found an article by Dave Finley N1IRZ on a method of CW training developed by a German psychologist called Ludwig Koch back in the 1930's.

Reading though Dave's article, I decided that it all made a lot of sense. Basically you start off learning the code at the speed you would like to achieve. Unlike the Farnsworth method which seeks to reduce the gap between the letters as you become more efficient, Koch came up with the idea that you should start off just learning two letters at full speed and add an additional letter once you reach 90% proficiency until you have mastered them all. Since you are only learning one new letter or figure at a time, your frustration is significantly reduced.

Dave Finley gave a suggested order for learning the letters and figures and recommended a programme called Super Morse to use as a trainer. I quickly realised that Super Morse offered more features than were required to learn Morse by the Koch method and decided to write my own programme orientated towards the Koch method. 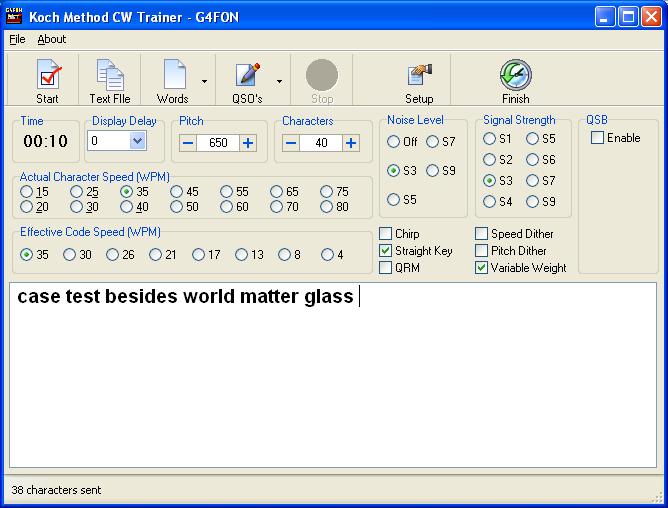 The resulting programme runs under Windows 9x, NT and XP and requires a sound card. You are welcome to download a copy and see how you get on.

If you have a suggestion, send it to me and I will endeavour to incorporate it in a later release.

Positive feedback from users of the software make it clear that the Koch method is a very effective way of both learning Morse and also improving your Morse skills.

With an improved visual style and integration of a range of different Word, QSO and Test files, version 9 builds upon the success of version eight. If you are upgrading from an earlier version, I suggest uninstalling the old version first - you will not loose any setting if you do this.


The most frequently asked question to date has been:

"Okay I have mastered K and M, how do I move onto the next character?"

To do this you need to change the 'Characters' setting on the main window,

Click on the up or down chevron to change the value, or enter it directly into the box.

"The software crashes with an error in RichEdit.DLL after playing a few characters"

Next time you start the application, it should be error free. Let me know by email if this does not fix the problem for you.


For those of you taking the US test, download this Zip File containing around 300 sample tests in the US format. The file was created by Jim Weir, to whom many thanks and contains instructions on how to use the files and what you can expect from the test. This is really only applicable to versio 8 of the software as the files are fully integrated into version 9.

If you experience a problem with the Morse trainer, contact me at the email address shown to the left of this screen. When reporting a problem time can be saved by sending me the following details:

1. The version number of the software from the About screen.

2. Your computer make, amount of RAM and CPU speed.

3. What make of sound card your computer uses (right-click My Computer, select properties, click on Device Manager and then look under multimedia for your sound card).

4. What version of Windows you are running.

5. What other programs you have running when you tried to run the Koch trainer - look on the task bar. Pay particular attention to anything that might be using the sound card.

and also include a brief description of the problem.

Version 2.4.0 released 11 February 2002, added the characters sent display - thanks to Jay, AJ4AY for the suggestion.

Version 3.2.3 released 4 March 2002, changed the maximum session duration to 1 hour at the suggestion of Mike, AC4NS

Version 3.3.0 released 25 May 2002, added a user definable delay between clicking Start and the Morse starting at the suggestion of Chris, NCØS

Version 3.4.0 released 12 June 2002, added presetable inter-character delay. This is not in keeping with the Koch method and I would advise not using it if you are aiming at a code speed of 12 WPM or more, but for folks looking to pass a 5 WPM test to get on the air, it may prove invaluable.

Version 3.4.4 released 12 July 2002 with a fix to some sound problems which creep in if you run at the reduced code speeds. This problem appears as appears as clicks and also off pitch tones. Thanks to Gerry, W2GER for pointing this out and helping to fix it.

12 July 2002 - David Gwillim has also been busy updating his KochRx programme so that you no longer need to 'Copy and Paste' the text from my application in order to check your results.

Version 4.2.0 released 5 November 2002 - Fixed a couple of bugs in the display, added word by word reveal of the Common Words file and added the option to make the Morse sound as though is being sent from a straight key.

Version 5.4.0 released 14 May 2003 - Fixed a couple of bugs in the display and use of defined characters. Added a local QRM generator which transmits Morse slightly off frequency. Added additional steps in the Farnsworth setup and fixed a long standing bug in the random number generator.

Version 5.4.5 released 16 July 2003 - Fixed a couple of bugs in the display and use of defined characters. You can now successfully display the user defined Prosigns! There was also a lockup situation which occurred if you rapidly clicked Stop then Start which should be fixed in this release.

Version 6.0.8 released 27 December 2003 - Finally, having promised an update for some time. Thanks to various people who have helped in debugging this version, including Kevin KI4DEF. There is now a special 'Sample QSO' button which becomes active after you have learned all the characters. Prosigns have been improved, now you can have triple letter prosigns! There are also a number of bug fixes.

Version 6.0.11 released 15 February 2004 - Fixed a bug which did not display the words correctly if you delayed the display when listening to Common Words. Added extra code so that all settings are now saved at shutdown and loaded on restart.

Version 7.0.6 released 15 November 2004 - A slew of new features including speed and pitch dither, a resizeable window and speed changing on the fly.

Version 7.0.7 released 20 November 2004 - Whoops, XP got me and the main window does not display correctly on XP, so download this version which corrects the problem.